A basic training loop in PyTorch for any deep learning model consits of:

In 5 lines this training loop in PyTorch looks like this:

Note if we don’t zero the gradients, then in the next iteration when we do a backward pass they will be added to the current gradients. This is because pytorch may use multiple sources to calculate the gradients and the way it combines them is throught a sum.

For some cases, one may want to do more to control the training loop. For instance, try different:

For each case, you end up rewriting the basic loop and adding logic to accomodate these requirements. One way to enable endless possibilities to customize the training loop is to use Callbacks. A callback is very common design pattern in many programming languages, with a basic idea of registering a handler that will be invoked on a sepecific condition. A typical case, will be an handler for specificc errors that may be triggered when calling a remote service. 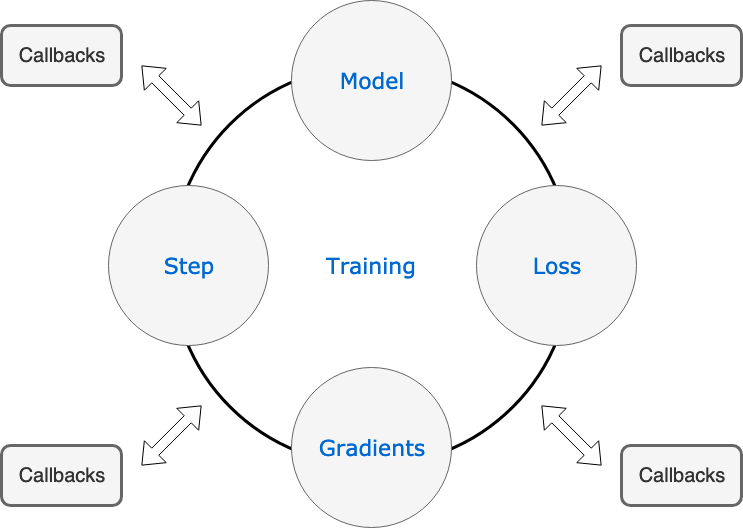 Over the curse of the training, adjusting the learning rate is a practical way to speedup with convergence of the weights to their optimal values and thus requiring less epochs (which has the benefit of avoiding overfitting). There are different ways to schedule learning rate adjustment, time-based decay, step decay and exponential decay. All of which can be implemented with callback, for instance before each mini-batch:

Early stopping aims to let the model be trained as far as a target metric is improving (e.g. accuracy on validation set) and stop otherwise in order to avoid overfitting on the training dataset. Using a callback, we can decide wether to continue training after each epoch or not as follows:

Use PyTorch support for multi-GPUs, example

Gradient clipping allows the use of a large learning rate ( \(lr=1\) ), see discussion. It can be done by safely modifying Variable.grad.data in place after the backward pass had finished, see example.

The basic idea behind accumulating gradient is to sum (or avergage) the gradients of several consecutive backward passes (if they were not reset with model.zero_grad() or optimizer.zero_grad()). This can be straightfully implemented in handler for loss calculated event:

Callbacks are a very handy way to experiment techniques to traing larger model (with 100 millions parameters), larger batch sizes and bigger learning rate, but also to fight overfitting and make the model generalizable. A well-designed callback system is crucial and has many benefits:

However, a mis use of callbacks can turn into a nightmare called callback hell.