Fake news can belong to one of the following categories 1: a news which is intentionally false (i.e. a serious fabrication), hoaxes (i.e. created with the intent to go viral on social media networks) or articles intended as humor or satire. Here is sample legitimate and crowdsourced fake news in the Technology domain 2

The task of detecting fake news requires the application of NLP algorithm to search for patterns or linguistic constructs that could be used to flag an article as fake news. This task is different form fact checking which involves cross-referencing articles with other articles to look for inconsistency in the given information.

An algorithm for detecting fake news with an accuracy that outperform those of humans is a cutting edge AI work. As it involves not only the detection of non-fake news, but also the capabilities of verifying the ground-truth, and accounting for factors such as developing news and language and cultural interpretations.

In the following we address Fake News detection with a Text Classification approach that simply uses an NLP algorithm to parse sentence structure and hone in on keywords to classify news based on a training set with flaged fake and non fake articles content.

The problem with the Fake News detection is that there is not enough data, a collection of articles with speific requirements that constitues a fake news corpus. What researshers usually do is constructing a dataset by crowd-sourcing fake news articles (e.g. through Amazon Mechanical Turk workers).

The following are some commonly available datasets for training NLP algorithms to detect fake news:

Will be using this dataset. After downloading and un-zipping the file, load it into a dataframe to have a look:

The first thing we need to do is tranform those articles into something that can be processed by computers throught two differents steps:

Those operation as performed by the folloing simple command (this can be slow):

A language model is a model trained to guess the next word starting from a sequence of words as input. It has a recurrent structure and a hidden state that is updated each time it sees a new word. This hidden state thus contains information about the sentence up to that point. Check this article for more details on how to train a language model from scratch.

We need to train a model that classifies the news from scratch, starting from a model pretrained on a bigger dataset (wikitext-103 3). This pre-trained model catches a ‘knowledge’ of the English language which will be useful to our classifier.

But we should properly handle the specificity of our dataset. In fact, the English of the news in out dataset isn’t the same as the English of wikipedia, we need to adjust a the parameters of our model. Furthermore, words that could be very common in our dataset may not be present in wikipedia, and as a result might not be in the vocabulary of the wikitext-103 model.

Therefore, before jumping on the classification we first need to fine-tune the pretrained model to our particular dataset. We will use a special TextDataBunch class for the language model that ignores the labels (fake vs. real), the training this model for several epochs as follows:

The following figures depicts the training history which takes several hours to finish: 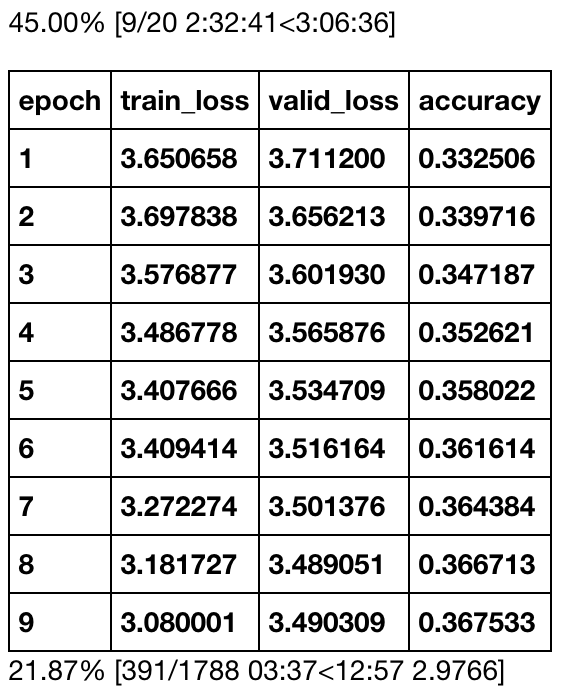 After that the model is trainined on our dataset, we can try generate news as follows:

After training a language model on our fakenews dataset, we can use this model to extract features from the articles and use them as a classification attributes.

After several epochs, the accuracy of the classifier reaches 0.949447!

Here is an example of classifly an article: